The opening barrage of the Battle of Verdun created massive forest fires in which players will fight for domination. This is an uphill battle towards the massive fortresses of Verdun. A constant grinding struggle where the artillery never stops. Where the forge and “the Devil’s Anvil” continues to consume even the bravest combatants." — Battlefield.com Description Verdun Heights is a map set to be featured in the Battlefield 1: They Shall Not Pass expansion. It takes place during the Battle of Verdun in the year 1916. 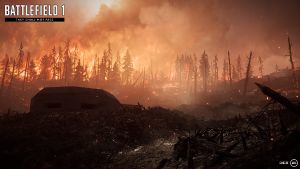 Part of the World War I