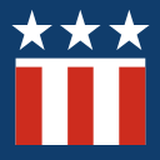 The United States of America is a faction in Battlefield 1.