Sinai Desert is one of the Maps in Battlefield 1.

Prepare to take part in the Battle of the Selle in the cold autumn of 1918. Here, the fighting moves out of the trenches and into open country where a massive crashed airship casts its shadow onto the battlefield. The British forces have broken through the Hindenburg line and are now in pursuit towards an important railway center. Fierce infantry and tank engagements ensue on the open ground and river banks alongside the Cateu-Wassigny railway where an armored train can still turn the tide. 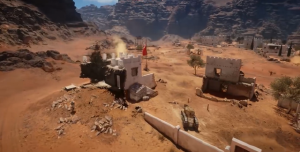 Destroy the stone arch to nerf your sniper problem

The stone arch in Sinai Desert (near point C on Conquest) . This elegant natural stone provides a handy bridge for snipers looking to find a cozy perch on the mesa it’s attached to. In a map with so many wide open spaces and objectives crammed in the ravines between the mesas, scouts can reap quite a headshot bounty up there. If they’re being particularly annoying, grab a tank, maybe place some dynamite as assault, and get exploding. It doesn’t go down easy, but it’s worth the time if it helps your team push into new territory.

P.S. Try putting a tank up there

If your team takes ownership of the arch, trying getting a tank up there. It may not be a long term defensive plan, but it’s sure to give the other team a fright.