This article is a stub. You can help Battlefield 1 Wiki by expanding it. 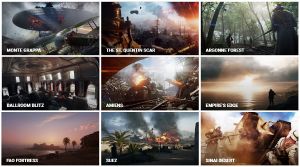 If you've followed anything about Battlefield 1 you've likely noticed a variety of locations at the dawn of all-out war. Deserts, Forests, Crumbling cities; Battlefield 1 will bring you to new and exciting Maps and multiplayer maps will support up to 64 players as you take part in some of the largest battles in FPS history.

→ See also: Modes - Complete with insight into the three game modes in Battlefield 1.

In The Name Of The Tsar Maps