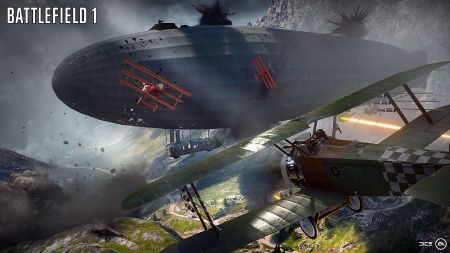 Giant's Shadow is one of the Maps in Battlefield 1.

Prepare to take part in the Battle of the Selle in the cold autumn of 1918. Here, the fighting moves out of the trenches and into open country where a massive crashed airship casts its shadow onto the battlefield. The British forces have broken through the Hindenburg line and are now in pursuit towards an important railway center. Fierce infantry and tank engagements ensue on the open ground and river banks alongside the Cateu-Wassigny railway where an armored train can still turn the tide. Giant’s Shadow will be coming to Battlefield 1 as part of a free update in December. [1]