"The first big engagement inside a fort during World War 1 takes place in the dark underworld of Fort Vaux. Down in the maze of dark galleries and wet stone corridors, French and Germans fight ferociously with grenades, guns, bayonets, and flamethrowers. Watch your corners!" — Battlefield.com Description Fort Vaux is a map set to be featured in the Battlefield 1: They Shall Not Pass expansion. It takes place during the Battle of Verdun in the German raid of Fort Vaux in 1916.

Strangely, During the demo, There was a room labelled "Isolement" that is blocked off by a heavy steel door and chains. If the player stands in front of the door they will hear zombie-like screams followed by a large thud on the door. Whether this is simply a soldier suffering from extreme shell-shock, Or an actual zombie, is currently unknown. 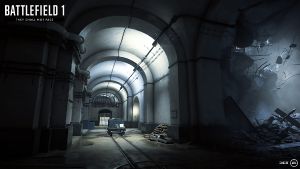