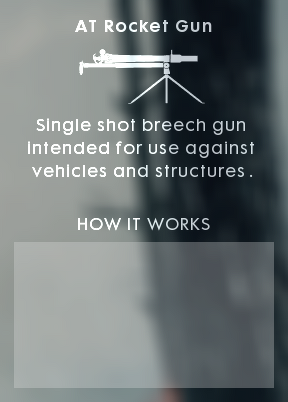 The AT Rocket Gun is a gadget for the Assault class in Battlefield 1.

Single shot breech gun intended for use against Vehicles and structures.

The AT Rocket Gun is the Vickers Q.F. Gun, sometimes called the Vickers-Crayford Rocket Gun. It was not a rocket launcher but rather a small assault gun designed for trench warfare and used in air combat, particularly against zeppelins. The low-velocity projectiles were sometimes mistaken for rockets, particularly the incendiary rounds. It is the ancestor of the modern light cannon found on aircraft, such as the M61 Vulcan.